Amy has Liver Qi Stagnation. She arrives for her session, double latte in hand, irritated with the congested traffic and lack of parking. Her menstrual migraines and mood swings are worsening and she wants nutrition suggestions. Then there’s Joe who wants help with weight loss. His boss is difficult and he feels angry at work but there are few openings in his field so he feels trapped. It’s hard for him to get motivated to do anything so he spends hours playing violent computer games rather than exercise. He’s too depressed to cook or shop so he heads to a fast food joint for burgers and fries.

These real life examples of Liver Qi Stagnation are one of the most commonly experienced patterns identified in Traditional Chinese Medicine (TCM). Most of us have had this pattern to some extent from time to time. Since Liver Qi Stagnation may lead to further imbalances such as in Liver Fire Rising, or Liver Invading the Spleen, it’s important to be able to reduce the Stagnation before it gets that far. When we recognize this pattern in ourselves and in our clients it illuminates our understanding and subsequent nutrition and lifestyle directions.

When we discuss the Liver in the TCM system we capitalize the first letter to remind us that we’re talking about a functional system. The following description is not the same as the liver we learned about in our anatomy and physiology classes. A main function of the Liver in TCM is to as move Qi (energy) and Blood so that all the other organs and muscles are energized and nourished. Liver likes to be motivated, to accomplish goals, to move forward in life in a creative and dynamic way. Anger and frustration emerges when our way forward is thwarted. Liver is the organ system most affected by repressed emotions.

Typical signs of Liver Qi Stagnation include distention in the upper abdomen, or a sense of constriction in the chest, often sighing in an attempt to relieve the pressure. This pattern also includes many emotional signs such as depression, irritability, feeling wired, or mood swings. There are some digestive signs such as nausea, vomiting, abdominal pain, churning in the stomach, sensing a lump in the throat or difficulty swallowing, a bitter taste, constipation, or diarrhea. A person doesn’t need to have all of these symptoms to have this pattern.

Women’s Health and the Liver

Liver Qi Stagnation shows up in some women in the week before the menses. This is the time when the Liver has a lot of work to do to move Qi and Blood to prepare for the menses. If the Liver is not up for the job, PMS signs such as painful breasts, irritability, mood swings and cramps show up.

Stuck energy accumulates and may explode if not released. When Liver Qi is stagnant for a long time, it can lead to tempers flaring, headaches, migraines or high blood pressure. This would be a sign of Liver Fire Rising, a pattern that shows further imbalance.

Over time, stagnant Qi will make the Blood congeal and result in the pattern called Liver Blood Stagnation. The person may feel a stabbing pain which is fixed in one location such as in some kinds of back pain, or all menstrual cramps. There may be clotted menstrual blood. Abdominal masses such as fibroids, benign uterine tumors, are a sign of Liver Blood Stagnation.

Sometimes Liver Qi Stagnation can build up and exert too strong an effect on the Spleen or Stomach. This causes nausea or vomiting, abdominal pain as well as alternating constipation and diarrhea. Irritable bowel syndrome fits in with this pattern called Liver Invading the Spleen / Stomach.

Looking at the Tongue

Liver Qi Stagnation may not change the color of the tongue, but if the condition has advanced to Liver Invading the Spleen/Stomach or Liver Fire Rising the tongue will be redder on the sides. In addition with Liver Fire Rising there may be a yellow coating on the body of the tongue. The tongue of a person with Liver Blood Stagnation will have some purple on the sides or with spots of purple. Next time you have a client with signs of these patterns ask to look at their tongues. If you need a further reference look at Tongue Diagnosis in Chinese Medicine by Maciocia.

1) Eating big or rich meals will make the energy more stuck. My client Sally suffered from irritable bowel syndrome. She experienced many signs of Liver Qi Stagnation such as mood swings and PMS as well as signs of Liver Invading Spleen such as digestive pain and alternating constipation and diarrhea. A key suggestion was for her to eat small meals since the worst pain occurred when she would overeat. Filling the stomach only 1/2 full or 3/4 full would be an especially appropriate suggestion.

2) Avoid hard to digest foods which may vary from individual to individual but in general includes fried foods, excessive dairy and meat, rancid or hydrogenated fats, and overly processed foods full of chemicals.

3) Complex meals can also increase Stagnation. Make food-combining suggestions that encourage easy digestion without being too rigid. The most basic idea is to eat fruit separately. It is also less congesting to eat a protein-rich food with vegetables rather than grains or potatoes. Separating dairy foods from meat also leads to lighter meals.

4) Some people love the stimulation of hot, spicy foods. Since Liver Qi Stagnation will often increase heat in the body and may even develop into Liver Fire Rising those chilies and curries would only make the situation worse.

5) People with Liver Qi Stagnation gravitate to drink caffeine. On the short term the Stagnation is relieved and their moods lighten; however, later in the day, the caffeine wears off and the Stagnation returns with greater effect. Similarly a person with this pattern may be drawn to sugar treats or smoking marijuana to find relief but the returning symptoms are worse once the temporary lift has past.

Focus on increasing cooling and soothing foods while adding the bitter and sour flavored foods. Fruits and raw vegetables are moistening and energetically cooling and would help to relieve Stagnation if the digestion or Spleen energy is strong. Cucumbers, celery, and chickweed from the garden would be helpful here. If the digestion is weak, lightly steamed vegetables, soups and stewed fruits would be better assimilated yet still relieve Stagnation. Whole soy products such as tofu and tempeh are cooling, although soy is a common allergen, and best avoid if there is an allergy. Alternative cooling options are other beans, especially mung beans.

Green microalgae powders are considered cooling and also detoxifying to the liver. Spirulina is the most cooling algae of them all. Bitter and sour flavors are decongesting and cleansing for the liver. Herbal teas like dandelion root tea or burdock root, and bitter lettuce greens like endive and raddiccio are good suggestions. Tangerine or orange peel added to dishes or teas will increase the bitter flavor. Adding lemon juice or apple cider vinegar to water as a beverage, or sprinkling over vegetables will increase the sour flavor.

Be Simple, Be Clear & Emphasize the Do’s

Since irritation and a sense of constriction are hallmarks of this pattern, a client with Liver Qi Stagnation may be easily overwhelmed or frustrated with complicated nutrition suggestions. A long list of Don’ts adds to the sense of restriction and pressure. Liz was a client living in a small apartment with only a microwave and a hot plate. She held several jobs to make ends meet and had no time to cook or even sit still to eat. Consequently she had developed severe digestive disturbances. You could say that her Stagnant Liver Qi had invaded the Spleen/Stomach. Every suggestion I made to her was met with a reason why she could not do it. There seemed to be blocks everywhere she turned, and for a moment we felt the frustration of her difficulties. Then we took a deep breath, brainstormed together, and came up with a list of foods and activities she felt she could try. Later she wrote to tell me how helpful the session had been.

As my ability to recognize TCM patterns in my clients has developed it has become easier for me understand connections between seemingly different symptoms such as migraines and mood swings. If my clients are irritable and frustrated, it is easier for me to be compassionate and understanding because I can see these as signs of a bigger picture. By relieving Liver Qi Stagnation we are all freer to pursue healthy goals and lead a more fulfilling life. 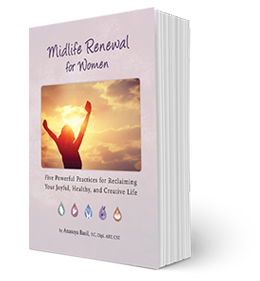 Sign-up to receive my free Ebook,
Midlife Renewal for Women